Make your best guess … what oil is this? 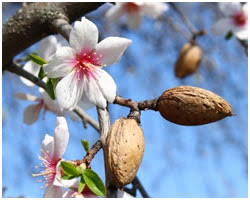 Rich in protein, Vitamin D, and Olein Glyceride Linoleic Acid, Almond Oil is equally as desirable for hair and skin as the nut is for a snack. Originating in Spain, the Prunus dulcis grows best in a Mediterranean climate. American Almonds are grown in California, but these nuts are also grown in Australia and Italy where the winters are cool, and the summers are warm. Almond trees bloom in an approximately two-month period between early February and mid-March.

Although this year’s bloom season began with favorable weather conditions, February had a few nights with freezing temperatures, causing some damage to the crops. The damage caused by the freeze is still being analyzed, although some sort of negative effect on the crop is expected.

The drought is an ongoing concern amongst the State of California and the Almond industry, many growers are reaping 0% of anticipated water allocations.

The 2021 harvest yield for Almond Oil is still being finalized, but it is predicted to reach 2.9 billion pounds, which is a decrease from 2020’s crop size of 3.1 billion pounds. The projected yield harvest for 2022 will be released in May, although early predictions suggest that it will be around the same amount as 2021 (2.9 billion).

The February freeze is expected to have an impact on the overall harvest yield.

The global demand for Almonds is high and the market is currently stable. However, Almonds are already expensive, and supply chain issues and port backlogs pose a potential increase in price if the demand is not met.